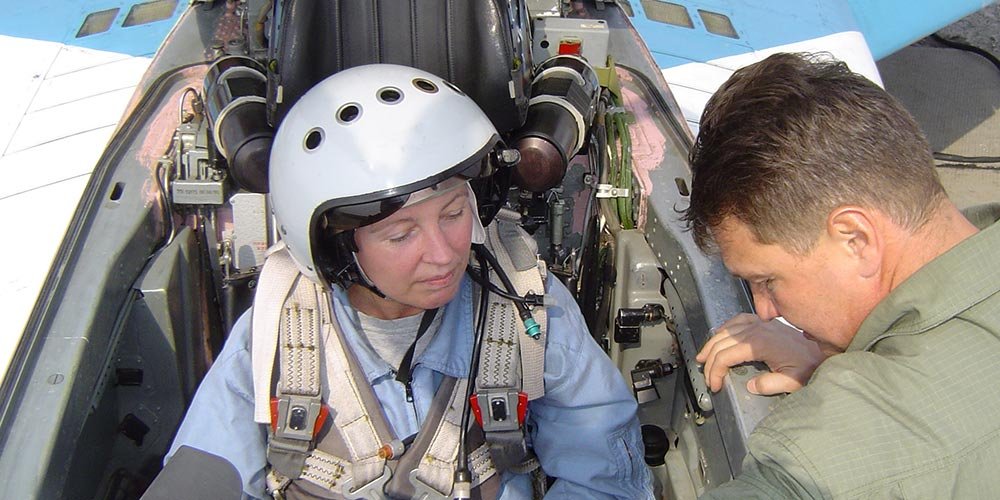 I never forget the day that Janne my wife said that she would like to fly a jet. At the time it just sounded like just another “wish” on the considerable wish-list, and the remark was quickly forgotten. However, over the years, the issue was brought up again on several occasions. Though ignoring in the beginning, an undertone of passion was noticed.

Last year, I had the chance to experience an opportunity of a lifetime. A friend had bought a sailing yacht in the USA, and this boat had to be sailed across the Atlantic to Norway. I was asked to join, and I did not hesitate for one moment. To comprise an ordeal into a few words; it took us 3 months (minus 1 day) to sail this boat to Norway. As every married man would know, such a fulfilled task needs to be compensated, and the “jet-wish” was brought to light again.

Using the time to navigate the web pages, very quickly the possibilities of flying a Mig-29 in Russia were identified. Though I do fly a lot (as a passenger), it is not my favourite hobby. Trying to speak the idea (i.e. this is total madness and for pilots only) out of the wife’s head appeared not being very successfully, on the contrary, it strengthened her mind in doing so. Not very late after, a date was set and the flights were booked. This would be a “girls-night-out” party on a grand scale. She and 2 two of her girlfriends would travel to Russia, and she would fly the Mig-29. Agreements were set “in stone” so to speak.

Janne and Meindert with the Sokol test-pilot Sergei Kara

I still vividly remember the evenings, me telling my sailing experience whereby any (hard)earned respect was merely “blown out of the sky” by just one remark of an entering wife: He, guess what, I am going to fly the Mig-29. Apparently, this had to stop, and I was happy that the day neared. Was it not for a broken fuel booster pump, the ordeal would have been over, there and then.

One day before the ladies travelling, the agent informed Janne of the deficiency. Profoundly disappointed, but accepting the safety issues, she decided to go anyway by just having a good holiday time with her friends in Russia. Seeing her hard broken in this weak moment, I volunteered travelling with her as soon as the trip could be realised again. Only a few months later, a new date was set and travel tickets, visa-permissions, hotels etc. were arranged for the two of us. We should travel to Russia together, and this time, she should fly the Mig.

Janne during the MIG-29 cockpit briefing

Via Copenhagen (Denmark) we ended up in Moscow for a few days of deserved rest. Spending days watching the “known” attractions, it became quickly time to head for Nizhniy Novgorod (old “Gorky”). The domestic flight was provided by a 2-propelled aeroplane of local make. My fears were even more confirmed when the stewardess started handing out “vomit” bags before the trip. One and half hour later, we arrived in Nizhny Novgorod. I entered the small arrival hall, with a white face and a heavy, relaxed wife on my side. This turbulence was nothing, were her words.

The hotel in Nizhniy Novgorod was charming. The Alexandrovsky Garden Hotel provided a beautiful river view and was located near the town centre. On the afternoon, before her flying, the agent phoned the room. While Janne was under the shower, I answered the phone. Receiving instructions for the next day, he also informed me that Janne should bring an extra set of underwear, in the case of “accidents” happening during the flight.

I worried even more, and I remember several times waking up that night dreaming of my wife “fouling” the cockpit. Under all this, she remained very calm and even managed, to my absolute disbelief, eating a standard breakfast. This was going to be a hell of a day.

MIG-29 is been prepared for take-off

Precise on time, we were picked up and driven to the base. After an exciting tour through the local museum, I quickly noticed that we were dealing with people being very proud of their produced aeroplanes (jets). Listening to the stories told in the museum, they have a very reason for being so.

Then, finally, the “to-do” part arrived. Janne was introduced to the pilot, and I still remember his look. Weather, it was a “sceptical” look caused by seeing Janne, a little Norwegian blond eager to fly, or seeing me, a white-faced worrying husband. To this day I still don’t know. Janne was directed to the doctor, for a last medical check. After 12 years of marriage, I know that a doctor visit scares more the sh** out of her than anything else, but luckily this part went fine.

Next was the dressing. Finding the correct sized gear proved to be difficult. I guess that a “normal” sized pilot exceeds Janne’s length of 1,64 meters. The drive to the plane proved to be short. Janne was strapped in the co-pilot’s seat, her seat was raised, and she was told of the primary indicators such as speed, height and communications. The ejection seat procedures were explained, and the pilot highlighted that this was for information only. In the case of an emergency, he would activate the sequence, and everything would go automatically. So Janne was not to push the button, or the bill would be sent to me, was jokingly explained. (A very comforting message knowing her years of frustrating experience with the television controls).

Janne in the MIG-29 cockpit before her high-aerobatics flight

Finally, they took off for a so-called test-round. The pilot would assess how much Janne’s body could take and would this be successful, then they would return to the base area for the acrobatic stunts. Well, to my great relief, I saw the plane returning to the airfield area performing rolls, dips, loops and God knows what, like there was no tomorrow. It was also awe-inspiring seeing this from the ground. The capabilities of this plane are just huge.

About 45 minutes later they landed, and the pilot immediately left the plane to shake my hands. He explained that all he could hear through the intercom was her smiling/giggling at every acrobatic move. Up to 7Gs were reached without her passing out or getting sick for that matter. On the way back, the pilot has shacked his head of disbelief. How was this possible? She did not even sweat. I had to agree with him. Maybe my worries were for nothing after all...Well done. A huge success.

The travels back home from Nizhniy Novgorod, via Frankfurt went quickly and effectively. A few weeks later, we received the video and photos. Every visitor in the house is proudly shown the certificate and video, and their reactions are all the same; oh my God; and you did that? Well done. In the meantime, I have packed my sailing trip films. Watching for hours, a sailing boat drifting eastwards is nothing compared to 20 minutes, sky-rocketing, performing the most insane acrobatic stunts through the skies of Russia.

Her wish came through, and you people made it possible. Thanks to all the people involved, most of all to Andreas – who showed a lot of patience with me and Janne, who wanted to have the total adrenaline kick!

Janne from Norway cherishes a long time in her life, to fly with a high-speed jet fighter.
We satisfied her wish, and she hunted with a MIG-29 'Fulcrum' thru the heaven of Russia. After the flight she can't find the real words, out of this - her husband Meindert wrote an eyewitness report.