Alexander Gerst is doing my Job!

Alexander Gerst is doing my Job! 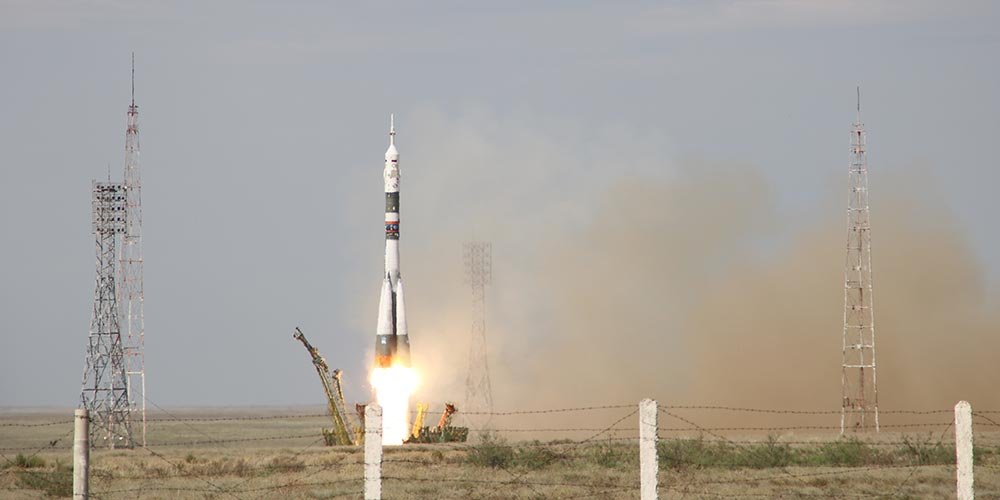 When I locked the door on June 2nd to leave for Baikonur, I was excited and full of expectations. Long time back the extensive preparations have begun, because, for me, it should not only be a simple tour to Baikonur, no, it was essential to see Alexander Gerst flying to the ISS. For several reasons it was not possible for me to apply for the ESA astronaut program in 2008, so it was crucial to see the guy flying, who was chosen at the end of the program. The fact, that ESA made a perfect choice, is obvious – at least since his first mission in 2014.

At that point, please let me add one additional comment: the extensive preparation period for this trip was not a big deal for me, because Andreas organised nearly everything from Space Affairs and I was regularly informed about the progress. Although we never met before our trip, everything was communicated via email or phone calls; I always felt to be in good hands. In spite of several train delays on our way to Frankfurt airport, we all met at the check-in counter in time. A group of five space addicts, each of us with a very interesting vita, so there were many stories to tell, and within a brief period, we became very intimate groupmates.

As we crossed the northern gate to the city of Baikonur after a three-hour drive through the Kazakh steppe, I could hardly believe that we are really there, that I am there, arrived at Baikonur. On a regular tour, the next item, to check in the hotel would be nothing special and no need to be part of such a report. However, there, everything is different, because we check in the hotel “Sputnik”. Each wall inside the lobby is covered with pictures and certificates of the Russian space history. All of a sudden, the front door opened, a well-known retired cosmonaut came along and checked in the room next door. For me, it took a little while to realise what happens around.

Soyuz MS-09 on the railroad to "Gagarinsky start" Pad#1

The check-in was followed by a short break to prepare for a guided city tour. Baikonur, the city full of space-related monuments, too many to see them all in one tour. Everybody was a little tired from the long journey, but it is crucial to have this city tour at the very beginning. There you get a first impression of the city and the mentality of its inhabitants. During that tour, we became a part of the spirit of Baikonur, and this is what makes the difference - not just being a tourist and watching the whole event from outside, no, it´s all about being a part of everything!. Nothing is dedicated to tourism here, and hopefully, this will never change! Roll out took place early the next morning. It was awe-inspiring to cross the gate and to enter the cosmodrome for the first time. Passing the sizeable liquid oxygen production facility and after a 30min drive suddenly the bus turned right to enter the “Progress” facilities. To follow the tradition, it is always only a few minutes after sunrise when the brand new Soyuz comes out of the hangar. The hangar doors point eastbound, and so the whole scenery is illuminated by the bright morning sun. We are only a few meters away when the train passes by. Even its speed is pretty slow, and the train passed too quick to take a look at every detail. However, there is another point where the train has to cross the road on its way to the launch pad. Of course, we also went to this spot to have the chance for a second close view. The destination for the Soyuz is also clearly visible from that intersection because the railway direction now points straight to the launch pad “Gagarin Start”.

We arrived at the excellent launch pad shortly after the rocket. This is the only place where some gates were used to separate the visitors from the rocket. There is much work to do for a significant number of people to install the Soyuz on the launch pad, so it is obvious to have the visitors separated. Nevertheless, we are not more than 20 m away from the rocket and follow the raising rocket with our eyes fascinated.

Andreas packed the time we had now until launch two days later with a large number of visits of impressive places dedicated to Russian space history. There was hardly any time for a break to relax, but who wants to have a break when there are so many exciting places to visit? None of us! Time flies when you are having fun, and the memory cards are already packed with photos shot during the last few days. However, now, today, it is launch day. It will be a daylight launch planned for approx 5 pm local time. To greet the crew, we are now allowed to enter the cosmonaut hotel. We passed the area many times on our way to dinner at the hotel Baikonur and tried to spot at least one of the cosmonauts. Unfortunately, we had no success, because the Russians take the quarantine very serious. Today, you have to have the camera prepared, because the crew only needs a few seconds to exit the hotel, walk along the line of visitors and to enter the bus. A small hint is given by the anthem of the cosmonauts when the music starts, and they exit through the front door.

While the bus with the cosmonauts heads towards the suit up the room, we have time to explore the garden of the cosmonaut hotel. We all stroll towards the cosmonaut's alley. Each cosmonaut whoever left earth from Baikonur planted a previous tree launch. Meanwhile, the trees evolved into an impressive alley, but I could testify that there is enough space left for many future generations of cosmonauts.

One selfie together with the tree of Alexander Gerst is mandatory, but for sure pictures of the tree planted by Jury Gagarin and the tree planted by Valentina Tereshkova also end up on my memory card! The absolute highlight is the impressive view along the alley and over a model of the Soyuz rocket into the vastness of the Kazakh steppe. I have zoomed in that place with “Google-Maps” many times before, and now I am here, stunned by my impressions, alone, because the group already walks back towards the exit gate.

I move from one foot onto the other, unable to hide my anticipation. We are at the parking lot close to the launch view area, but we hardly see anything of what happens on the launch pad, because a large building is still in our line of sight. Everybody around me is relaxed while eating sandwiches. Guys, are you kidding me? How can you have lunch while we are so close to launch time and urgently need to walk to the viewing site? I need to see the ready to launch Soyuz, now! Finally, we made it to the viewing site; for me, it felt like arriving just on time; in reality, we still had more than one hour to launch.

However, one hour is not a long, and all of a sudden, 15 seconds before launch, the last energy supply connector detached and the Soyuz MS-09 stands there, only held by the four support beams, ready to fly to space. While the timer was ticking backwards, you could feel the increasing tension of the crowd. The engines light seven seconds before liftoff, and with the Soyuz still sitting on the pad we could hear the impressive roar of 26 million horsepower. Less than 1.2 km away from the launch pad, for us, the following seconds became an adventure for all senses.

The atmosphere in the viewing area during the following minutes is challenging to describe. The Soyuz is already out of sight, the launch pad is empty, the smoke disappeared, but the intense tension of all visitors is still noticeable. Everybody knows that the critical ascend phase lasts around nine minutes. So we all stand there waiting for the announcement that the capsule safely reached space. A short glimpse into the faces of the family members of the cosmonauts as well as the coworkers of Roscosmos reveals the personal moment we just attended.

The signatures of the Syouz MS-09 crew

Having all these deep impressions in my mind, I would like to say thank you to Andreas, Alla and Galina. For all the extensive work they did and all the care, they took to make this trip unique and unforgettable!

Steffen applied as an astronaut candidate in 2008 but was not chosen.
10 years later he stands nearby the launchpad as Soyuz MS-09 lifted off with Alex Gerst, and Steffen said: „The guy is doing normally my job!“