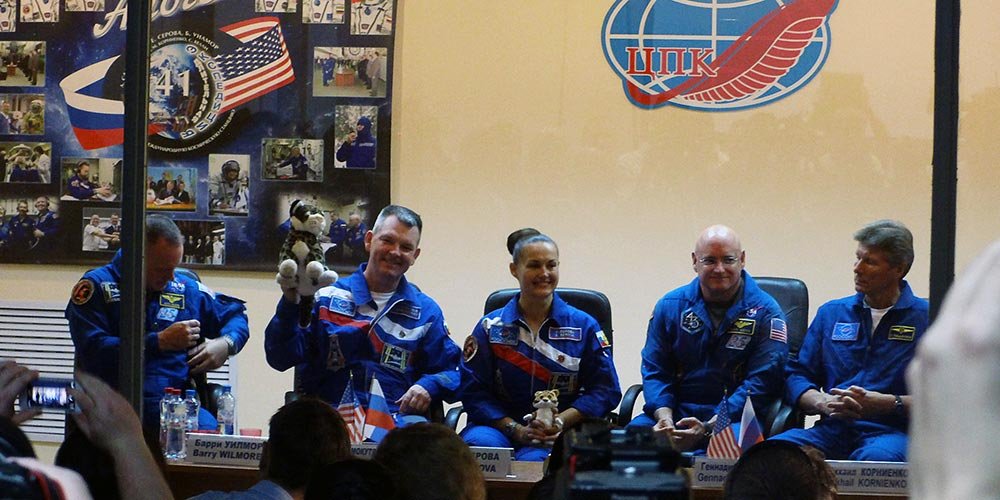 A long way of over 5,500 kilometres from Germany to Moscow and then to Kazakhstan lies behind Michael Najjar (artist from Berlin) and me until here to the Russian spaceport of Baikonur. Now we stand in the middle of the night about 2:00 in the morning in 1.2 kilometres distance to the brightly illuminated Gagarinsky Launchpad (the name is so chosen because from here already Yuri Gagarin started in April 1961 into space). The Soyuz rocket stands steaming and smoking like an aggressive dragon with the conical point upwards pointing in 1.2 kilometres distance before us.

We are not here as tourists, we have a mission: to capture the launch of Soyuz TMA-14M to the International Space Station ISS for Michael's art project "Outer Space" with the help of a lot of camera technology including a high-resolution cinema camera (the Dragon by RED). We have been following the cosmonauts' path for 4 days at their stations before the launch, and have also visited places steeped in history that have been in use since those times of a Yuri Gagarin.

Baikonur is an extraordinary place that seems to have a magnet in the sky that indeed pulls people upwards. Beside us, a Russian TV team has positioned itself, and the journalist in scene tries to capture the truly 'extraterrestrial scenery' in front of the TV camera with an excited voice. Apparently, she's here for the first time, unlike me. I've stopped counting how many times I've been in Baikonur for rocket launches.

The launch itself is not exciting for me. The Russians master these missions like hardly anyone else on this planet. The mastery of the camera equipment sets new standards and Michael, and I work on camera tripods, cameras and lenses. He is agitated, here for the first time and has too much technology to control! 10 minutes before the lift-off into space an extraordinary silence spreads and the spectators fall silent. Michael is in his element, far away from any reality. I stand calmly in the middle of the Kazakh steppe and wait for the things to come.

We wait in peace and stare into the night. The Dragon camera is mounted vertically because he wants to ban the launch of Soyuz later for a project, and the rocket must be visible for a very long time. Besides this, he installed 6 other cameras including his Hasselblad for exclusive photos.

15 seconds before the start it happens! The LED screen of the Dragon shows "Shut down", and the camera shuts down and goes out. No more time to restart it and Michael curses loudly into the night. I pull out my camera and point it immediately towards the start ramp to at least record the start!

Soyuz TMA-14M on the Gagarinsky launch platform before lift-off

Wrapped in glaring light, the Soyuz rocket shoots into the sky punctually at 2:32 a.m. local time, turning night into day! 600 meters above the launch pad, the Soyuz rocket looks like a brightly lit Christmas tree shining in many colour spectra in a fabulous scenery! This is engraved in my memory, and the thunder of the rocket engines shakes the cosmodrome! The rocket quickly inclines to the east, and the powerful engines illuminate the surrounding clouds. Since it is a night start, the journey of the cosmonauts and astronauts can be followed in the night sky for a very long time until the small glistening point is no longer visible after 4 minutes. Only 6 hours later, the Soyuz TMA-14M mission will dock at the International Space Station ISS at 450 kilometres altitude. We would not make it back to Moscow during this time!

The launchpad is now abandoned. The smoke has disappeared. Michael is angry! Too much technology in use didn't bring him what he wanted! He curses like a pipe sparrow! Only weeks later it turns out that he has received his object of desire, which will soon be on display.

In early 2015 I was contacted by Scott Free Productions (Ridley Scott's production company) from Los Angeles. They were looking for a night launch of a rocket and found on YouTube the launch video I had uploaded from Soyuz TMA-14M, and they wanted to have precisely this sequence because of the fantastic light effect when Soyuz races through the lower cloud layer and illuminates the whole sky.

So my "out of necessity born" start sequence, as the Red Dragon failed the service, was used as stock footage for a film by the highly acclaimed director Drake Doremus in which Kristen Stewart plays the leading role, "Equals". The film premiered in 2015 at the Venice Film Festival, and the launch sequence can be seen as a monitor image in the movie for more than 10 seconds.