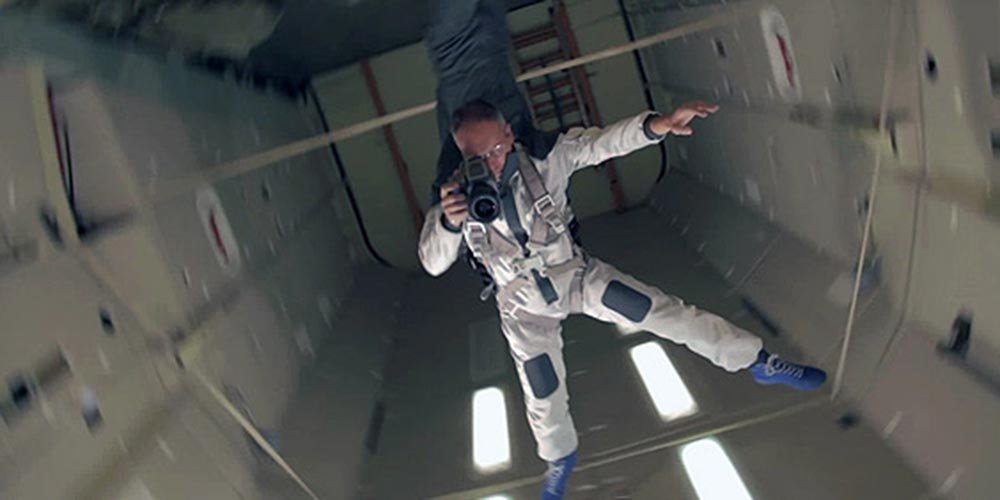 On 16th October 2013, my friend Thomas Rusch and I embarked on a flight to Moscow, returning to Star City.

After the exciting experience of a spacewalk training and a MIG-29 flight into the stratosphere, this time I was doing a parabolic flight in a Russian Ilyushin II-76. The zero or microgravity of space is simulated by flying a series of parabolic flight manoeuvres that counter the forces of gravity and allow astronauts and cosmonauts to learn how to perform tasks in conditions of zero gravity.

Michael Najjar in a parabola

The Zero-g training was part of the preparation for my upcoming space flight with Virgin Galactic´s SpaceShipTwo. I was especially keen to learn how to handle my photo camera in conditions of weightlessness.

Once again I intended to produce artwork for my series "outer space" during the training, means the per-formative aspect was of great importance. All technical requirements have been discussed and arranged in advance with Andreas of Space Affairs who gave us great support. The entire organisation and procedure of the Zero-g flight were highly professional. The instructors helped us a lot to coordinate our bodies and cameras during the periods of microgravity.

What I completely underestimated is the loss of orientation and the difficulty of body coordination in weightlessness. The sensation of my body floating in weightlessness was absolutely overwhelming. Without a stable gravitational reference, I experienced arbitrary and unexpected changes in my sense of verticality. The ceiling becomes the floor, the floor becomes a wall. These extraordinary sensations are the base on which I will create new photographic artwork like the here shown example "kinetic drift" from my series "outer space". Even days after the Zero-g flight I felt extremely euphoric and energised. Defying gravity is definitely a recommended experience.

My other experience with a deep dive in the Russian space suit "Orlan" and a flight to the edge of space with a MIG-29 high-performance fighter jet you can find here: Michael Najjar - outer space project

In 2014 Michael Najjar went to the United States where he did two HALO Tandem jumps from more than 30,000 ft with a free fall time each of more than two minutes!