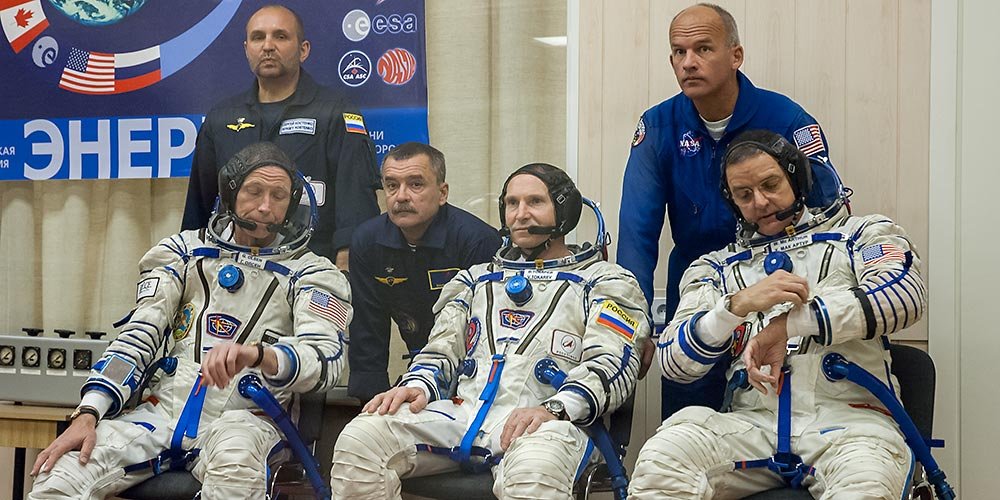 A little tired, perhaps, but with a sense of serenity and a smile like a schoolboy, he sits behind the glass pane in his vacuum-tight space suit, his helmet folded back - no sign of tension on his 60-year-old face. It must be the joy of moving a little closer to the dream of his life with every passing minute that reveals a few essential looks at his wristwatch and reveals his thoughts: "When will it finally start?"

Accompanied by two experienced cosmonauts, the Russian Valeri Tokarev and the American William McArthur, the American entrepreneur and millionaire Dr. Gregory Olsen wants to travel into space in a few hours as the third space tourist in the history of space travel. At this last press conference before the start - connected to the journalists via microphones for quarantine reasons only - he answers the curious questions once again.

Then it's off to the black night of Kazakhstan. The Russian commander of the mission, Valery Tokarev, salutes the duty general of the cosmodrome Baikonur, the world's largest spaceport, and the three cosmonauts board the bus that will take them to the launch pad. Half an hour later, they are already at the top of the 50-metre high Soyuz TMA-7 rocket inside their space capsule. Your destination is the International Space Station, 385 kilometres above the Earth.

We have positioned ourselves on a small viewing platform, a wooden crate with a corrugated iron roof. Meanwhile, the night has given way to a mild morning. From here it's less than 2000 meters to the rocket, which now rises dewy like a daisy into the sky. Nowhere else in the world can you get this close to a start, they say.

Just a few more minutes. The platform is now deserted. All technicians are in underground bunkers. But our observation post is bursting at the seams. Many spectators have come: Journalists, camera operators, former cosmonauts, Russian officers, NASA staff and a group of American tourists wearing Greg Olsen jackets. The whole thing already has an almost international character, and the vodka flows regardless of the early morning hour.

Just a few more seconds. The supply towers are folded back, and vaporising fuel clouds pass through the steel frame. Then the countdown:"..., tri, dwa, odin, nol". The engines ignite, and the powerful missile takes off. Immediately the flames unite to a glistening ray of light and even before the deep thunder penetrates to us the already some meters above our heads into a slightly slanting position. Ever faster and smaller, it shoots like a burning arrow into the deep blue, cloudless sky. Just a few moments later, every trace of her is missing.

All we see is a white steam ring somewhere high up in the sky. Attendees applaud. Hands are shaken. Everyone congratulates everyone. After eight minutes, the announcement reports that TMA-7 has blown off the third stage and entered Earth orbit.

For the travel group and the Americans, this morning is a sensation; for the Russians, it is simple routine. The Baikonur Cosmodrome has witnessed thousands of such launches in its over fifty years of history. During the peak phase of Soviet space travel, rockets took off almost twice a week. From here the Soviets shot not only Sputnik, the first satellite into space, but also the first dog, the first man, and finally the first woman. Again and again, the Russians were ahead in the hot race of the Cold War. While the Americans were still praising their lunar landings in the 1970s, the Russians were already testing the effects on the human organism in long-term stays in space. Permanent space stations served as preparation for a journey to Mars, its red planet. With a few billion rubles more in their pockets, they would probably have made it there as well.

But the reality is different. If you enter the breeding grounds of Russian astronautics in Baikonur or Star City, the training place of cosmonauts not far from Moscow, today for the first time, you will not be spared a culture shock of medium size. What the eyes can see here is desolate and rotten. The wind whistles through the last remnants of windows of dilapidated prefabricated concrete buildings. It is raining through the roofs of the training halls. Outdated Trabbis line the gutters of Star City and somewhere in the Kazakh steppes dust half-finished spacecraft in forgotten warehouses. The sun marbles the scrap metal lying all around as if she felt sorry for it.

Here and there, a monument symbolises the glory and splendour of days gone by. Nothing here has even the slightest hint of resemblance to the images of highly cultivated, modern space facilities as we are used to from America. For many years now, the Russians have lacked the financial resources necessary for the maintenance of the facilities, as well as for the continuation of costly projects and research work. Instead of building something new, old things are repaired, if necessary with chewing gum and adhesive tape.

We keep asking ourselves,"How can this all work?" But it works! And almost perfect. Thanks to their brilliant scientific pioneers and technicians, the Russians have created a system that couldn't be better, more reliable and cheaper. The technique is simple, almost primitive and has remained the same for more than forty years except for a few modifications. Why should they be changed, even if they have been tried and tested for decades? True to the motto:"Everything complicated is superfluous, the system of improvisation-oriented Russians is a concept of low tech, tradition and everyday routine.

Soyuz TMA-7 Roll-Out to the Launchpad

The fact that Baikonur translates as "brown earth" burns us deeper into the retina with each further day: 6700 square kilometres, 20 launching ramps, 1500 kilometres of road, a dozen potholes. Boundless, inhospitable steppe as far as the eye can see; ten times larger than the Kennedy Space Center in Florida. Just a few years ago, all spatial activity of the former Soviet Union took place here in secret. Not even the slightest piece of information was allowed to leak. Today the Russians have opened the gates to their ancient shrines. We are shown everything: production halls, simulation equipment, cosmonauts' toilets and the most giant centrifuge in the world.

The events dribble down on us like water from a tap: In adventurous military machines, we fly twice across the continent - from Star City to Baikonur and back again. Finally, with candlelight and vodka, we philosophise with Yuriy Gidzenko, the Soyuz commander of the first permanent ISS crew, about the future of Russian space travel. "Unfortunately, we depend on the many millions from abroad to keep the engine of our spaceflight running," he says. "But it runs. And that's the most important thing!"

Two days after the start of the mission, we can even follow the docking of the capsule to the International Space Station on a giant screen at the Korolyov control centre. All live, in 3D and colour! We are overwhelmed. Only flying into space once must be more fantastic.

Markus Gloger accompanied us on our tour from 26.09. - 05.10.2005 to Star City to the GCTC (Gagarin Cosmonaut Training Centre) and the start of Gregory Olsen to Baikonur.

Markus is a professional photographer with the sense of "absolute image".

He has travelled to several countries around the world, such as Nepal, Bahrain and the Azores, where he took different photos for various travel journals and wrote travel reports.

We are pleased to be able to win him over to the unique worlds of space travel, and one thing is for sure: He will continue to accompany us on our special tours, as he is the' right man in the right place' for both pictures and reports.