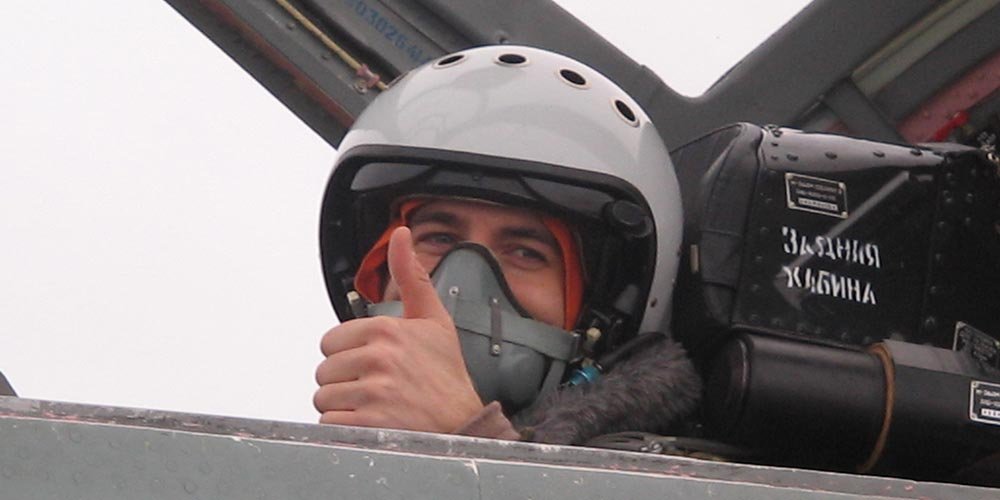 After a short waiting period rolls the machine right around the curve and stands now ready to be launched on the runway. Over my helmet, I receive each quantity of Russian radiograms between Sascha and the Tower. Sascha lets few instants later howl the engines the first time correctly, whereby itself - due to the still determined brake - the nose of the jet lowers. After a short period of waiting, the takeoff begins?

After the brakes are loosened, the machine begins to accelerate rapidly, whereby the power of the engines is out-played noticeably, but the jet takes off at a speed of approx. 260 km/h after a few seconds. We approach equivalent into a left curve and to steer to the cloud imposed sky steeply. I am surprised by it like calmly the machine lies in the air - it slides like an arrow through the air. From extreme centrifugal forces, I notice still nothing at this time. This load could bear even my grandmother, I imagine. At this time I always thought nothing terrible... Yes, we fly...

The front of the MIG-29 "Fulcrum" - Zuchovsky airbase

After - compared with a passenger plane - short time we push through cloud cover, where we are welcomed by the sun and radiating blue sky. The flight is further remarkably calm, centrifugal forces are minimal, and I enjoy the view. With my Sony Camcorder, I catch each quantity of beautiful pictures, to be able to grant apart from the impressions, which burn themselves into my memory, also for future generations a few ideas. To reaching a flight altitude of approx. 12000 meters, we fly some gentle curves, which really do not provoke my condition however yet. Sascha informs me that he would like to rise now to scarcely 20000 meters.

At this time we are already scarcely 18 minutes in the air. The nose lifts itself, and the sound of the engines becomes louder. It approaches (in the blue sky not yet visible) to the stars. The cloud cover among us departs more and more, and with a view, I notice upward that the blue over us becomes gradually darker. After approximately 3 minutes we reach an altitude of roughly 20000 meters, I enjoy first the breath-robbing prospect and notice that Earth's curvature on the horizon is to be seen easily. While the line of the horizon track-send is bright, the blue tones become upward darker ever - an original picture. Space makes impressively attentive on itself...

I hear Sascha's voice via Intercom in my helmet: "Christoph, your control", the Russian accent inescapably audible and is somehow cool. Carefully I embrace the control stick before me and slope him entirely smoothly to the left, to find the reaction out of the machine. The jet leans to the left immediately, drops thereby however easily, why I pull the clubs at the same time a little to the rear, to hold the horizontal flight attitude. I fly a relatively steep left curve and bring the bird then by steering back to a horizontal position. After I had played in the time before my flight a little bit with the Microsoft Flight simulator, I knew that a relative to strong impacts of the rudders would lead rapidly to the extreme inclination of the aeroplane, why I held back myself thereby.

Sascha made content notes and asked whether I would have already flight experience. "No, I have just game experience with the Flight simulator on my PC" is my answer and must laugh. Then I think that it is actually with "Do-it-yourself" flies now enough and release the Joystick - without previous announcement -. I do not also know, which devil rode me here.

In the next moment, the machine makes for light left drift and sags somewhat. The situation was probably not at all dangerous, but at this moment I was not conscious. Immediately my hands are again on the control stick, to intercept it. I fly still small right curve and hear briefly after that already in my helmet Sascha's voice: "Christoph, my control".

Christoph during the cockpit briefing with test pilot Alexander Pavlov

We go into a robust left drift, whereby we lose height properly at the same time ever more downward with a bent jet point, and I feel for the first time, how centrifugal forces take me correctly under pressure. My legs and arms become "heavy" in the real sense of the word and that, although I am wide awake in the situation. After some seconds Sascha turns the machine into a right curve to change over to place it - after a short phase in the horizontals - to the left with a role on the head then from this position into diving. WOW - what for a feeling! Still, the cloud cover removed relatively far races at a speed of approx. 1.7 Mach (more than 2000 km/h) directly on us too. The jet vibrated under the load and on me, working centrifugal forces press me in particular when pulling up the machine into an again horizontal flight position, strongly into my ejection seat. Out of the parallel, we go back into a sharp left curve, which is to lead us into the next dive. The altimeter before me turns as wildly in the circle and - with approx. 300m per second - in condemns short time put back altitude difference, causes for me due to the continually rising pressure, on my ear meanwhile, it occurs an extreme pain.

Now an extreme stress situation is for me approaching. In the right hand I hold my Camcorder, with left hand I try to open my oxygen mask, to be able to accomplish by the closing of the nose a pressure balance. Only today I know, why the mask could not be solved directly. My helmet visor was still closed, which I did not notice in the slowly budding panic. One of the Russians had still especially pointed out me when putting on the flight suit, that without opening the visor removing the oxygen mask is not possible. At this moment, this knowledge was as blown away. My pain is to be meanwhile hardly stillborn. Sascha inquiries via Intercom whether with me everything is correct, which I answer in the negative. When he hears of my ear pain, he instructs me to accomplish as fast as possible the pressure balance. And - finally - the oxygen mask can be solved. The pressure balance relieves the ears of the extreme pressure, which lets the pain disappeared immediately.

Christoph after his MIG-29 "Edge of Space" flight

I draw a deep breath and can enjoy meanwhile again the horizontal flight finally. Sascha leaves however only a short pause to me. The cloud cover came noticeably nearer, and looping was announced. Just two seconds later we are at the beginning of the looping. The machine pulls steeply upward, I notion air and I feel like an old car in a wreck press, which is crushed the vehicle. With 5G my fivefold body weight rests on me (with me approx. 435 kg). From the principle, the feeling from the roller coaster is well-known - the difference is the time factor. The forces continue during the entire looping phase, i.e. over 30 seconds, while one is confronted only very briefly in the Rollercoaster with such gravitation forces. I can hold the small, extremely easy SONY Camcorder straight still in hand - which has the thing for an unbelievable weight at one time! Fascinatingly... Sascha goes to the end of the looping into an extreme right curve and flies in such a manner scarcely over the cloud cover, that one has the feeling to be able to touch the "white cotton wool".

He informs me about the next flight manoeuvre - a parabola flight with "Zero-G" situation, in which we become weightless in the machine. From the horizontal flight position, he pulls the machine into extreme zooming up. As it were a rocket race we approx. 20-second push in the vertical line against space. Unbelievable gravitation forces of 5G affect us also here, while the engines howl loud. Sascha takes the thrust away, at one time completely, which leads to the fact that the jet tilts forward and occurs (in this case much confines), the plane follows a parabolic flight path. We fall against the Earth! During this phase, ahead of tilting, we are entirely weightless due to the waived gravitation forces for some seconds. The g-meter, which indicates the positive gravitation forces of 0-9G, swivels from first 5 suddenly on 0. I notice, how I - although I am buckled - easily from my seat take off and my feet the tax pedals abandoned. GLARINGLY!

A toast on the flight with Pernod

I do not know whether me with these whole manoeuvres without anti-nausea plasters would have become evil. In any case, ones I felt good, although something exhausted and did not have times a stocked dull feeling in the stomach. We break through the cloud cover - this time from above downward - and fly back now into some minutes to the airbase. To still offer to the met public on the soil no insert, Sascha flies over the runway in the right, but rather moderate speed. He knew already, why. At the end of the course, he breaks out sharply to the left with our machine! The manoeuvre, a so-called "outbreak curve", is an emergency manoeuvre for the air combat. Usually thereby approaching rockets or persistent pursuers can be shaken off. The bearing areas stand thus perpendicularly to the soil whereby the machine can lose actively at height and speed. The arising gravitation forces are extremely, so extreme that I lose consciousness briefly. I have a classical Blackout for approx. 4 seconds - my eyes become black?

When I come back to senses, we already are on the approach flight, which consists of two relatively gentle left curves. Later mother Earth has us in her hands. A singular experience is to end. We roll to our starting point, where I am taken by my crew on the receipt. It is knocked against with Pernod to fetch back around me besides my body also mentally again on the soil; -) After removing the helmet, I notice that my right ear was not assigned, and despite repeated pressure balance to anymore, but it does not open.

Back in Cologne, my HNO physician will diagnose a few days later the fact that I suffered a Barotrauma in such a way specified that also in the dipping sport of the most frequent occurs. It arises if a necessary pressure balance takes place too late or not at all. However, I carried, fortunately, no permanent damage off. After one two weeks elapsed, I heard on both ears again equivalent well. Afterwards, I recognised, by the way, the Russian lady doctor Sascha referred apparently to me good physical condition, why my flight program - various my predecessors compared with - might have failed probably something "more intensively"

Christoph could call lucky himself.

When he participated in summer in the Pernod Ricard sweepstakes, he could not suspect yet, that he would appear 5 months later in the cockpit of a Mig-29, NATO code name 'Fulcrum'.