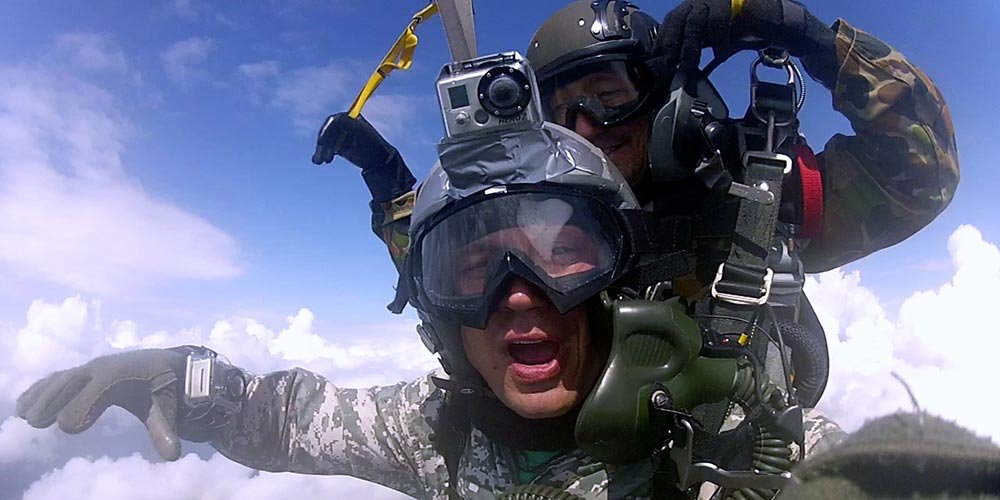 It was one of these moments that I would never forget!

I am a lucky person who could do already many great and exciting adventures for Galileo, but this HALO Jump was one of the most compelling stories of my career!

Harro Füllgrabe jumps into the abyss

I remember the 'Voladores' in Mexico, the descendants of the Aztecs, who jump with a simple knotted rope at the body from a 15 meter high trunk backwards into the abyss, to the spectacular descent of the Colombian drug police 'Junglas' out of the helicopter and the 220 meter James Bond bungee jump at the Verzasca Dam in Switzerland . These were also all unique experiences!

The moment of the jump is pure adrenaline. First, you think: "No, I can't do this!" but then, you're already in the air. There is no way back!

This stunning two-minute free fall, overlooking the curvature of the earth and the deep abyss with a cloud cover is just fantastic!

And the second, in which then the parachute opens after a more than 2 minutes free fall, is for a "skydiver rookie" an extraordinary delight!

Thanks, guys, that I could do this! And thanks to my HALO tandem master Mark Gerlach and Kevin Holbrook! Guys, you are great!

Harro is one of the anchors of Germany’s (Pro7) TV documentary shows „Galileo Extreme“.
He did for Galileo a lot of crazy stunts, but the HALO jump from more than 30,000 feet altitude scared the shit out of him, and after he did it, he wanted to do it again right away!