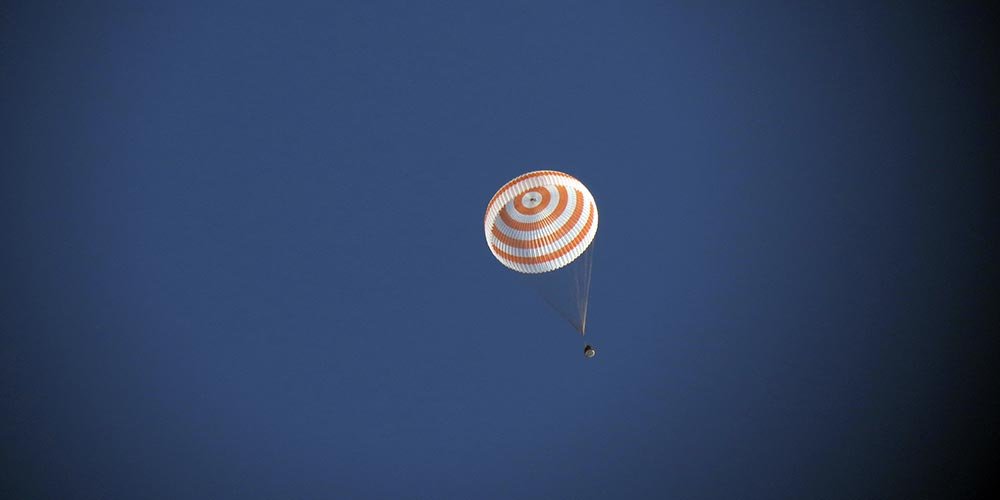 A few months after returning from Baikonur, Andreas Bergweiler offered us the opportunity to witness the landing of Soyuz-TMA08M and watch the return of the crew that we had seen the launch. With the good memories of our adventure in March still fresh in our minds and tempted by the idea to see ‘our’ crew land, we eagerly accepted the offer.

Roskosmos search & recovery teams are on the way

On September 9, 2013, we were back in Moscow, this time at Domodedovo airport. After having met our guides Vlad and Vasili in the afternoon, we took our connecting flight to Karaganda in Kazakhstan close to midnight. In Karaganda, we landed at what looked like a completely deserted international airport. We then drove to the hotel for a one-hour sleep and then headed out into the steppes in a couple four-wheel-drive vehicles. The vehicles, as well as a few other vehicles that would join us along the way, belonged to people who would actually assist in the recovery operations at the landing site.

Driving out to landing zone six took about nine hours from Karaganda. For the first three or four hours, there were still asphalt roads. We then ended up in a village called Atasu, which according to our guides, was ‘the end of civilisation’. Here, we had (another) excellent meal before really driving out into the steppes along sand tracks. On the way, we made several stops during which our guides and the recovery crews with which we were travelling let us join in food and drink. A very nice experience!

The crew of Soyuz TMA-08M after the landing

Then, early in the evening and surrounded as far as the eye could see by nothing more than tall grass, our guides announced that we had arrived at the landing zone. Our cars were set up in a circle, food and drink were prepared in there even was a bit of dancing with the recovery crews. After that, it was time to go to bed (the bed being the folded down back seats of one of our four-wheel-drive vehicles) to be ready and awake for the landing schedule for a few minutes before 09.00 the next morning.

The evening before the landing half of the sky above the landing zone was covered by clouds and, if anything, the clouds seemed to be pulling in rather than pulling out. The forecast for the next morning was cloud cover with potentially a bit of rain. When we woke up the morning of the landing, we were then obviously pleased to see clear blue skies! During the night the typical blue-and-white, six-wheeled 'Bluebirds' Soyuz recovery vehicles had pulled up near to our camp, so the first item of business was to have a look at them. We then had a brief breakfast and started chatting with our guides in anticipation of the landing.

The 30 minutes or so before landing is a period during which one really has to realise what one is actually doing. You are basically standing in the middle of nowhere, chatting with some people and then it becomes almost easy to forget that you are waiting for three people to return from space. Word reached us that the braking manoeuvre had gone well and that Soyuz was on its way to its intended landing zone, which meant to us! At the proper time and in the direction that our guides had told us to look we then saw Soyuz appear. First, and only for a fraction of a second, we could see a white line extending from the capsule. That was the moment the main chute was deployed.

The Soyuz descent capsule is loaded on an amphibic vehicle

The main parachute then inflated immediately, and after a while, the sound of the chute ’s deployment reached the ground. It is incredible to realise that you are watching three men falling to Earth from space. Together with our guides and the recovery crews with which we were travelling, we watched the descent for a few minutes to see in which direction the wind was taking the capsule. Once it had been determined whether capsule was likely to land, we got back into the cars and started racing after Soyuz. That was quite a powerful moment. You are bouncing across the steppes realising you are chasing a spaceship that only a few hours before was part of the International Space Station. At the same time to your left and right you see other vehicles, jeeps and the Bluebirds recovery vehicles also chasing the capsule while overhead about a dozen helicopters are also making their way to the expected location of the touchdown.

Within what felt like two or three minutes from the moment of touchdown we were right next to the descent cabin of Soyuz TMA-08M. Although conscious not to hamper the work of the recovery forces, we could basically go wherever we wanted. Through the right-hand porthole, we could see Chris Cassidy sitting inside. The recovery forces obviously have a lot of experience and are very efficient. Within minutes from landing a small area was cordoned off to allow the crew to be extracted from the capsule and be put in three rocking chairs that were set up close by. Then, one by one the crew members were pulled out of the cabin. Standing only a few meters from the crew, we had ‘front-row seats’ to see they were in good health and high spirits. After a while, the crew was moved to a medical tent to get a first medical examination and freshen up a bit. With the medical examination over there were put in Bluebird vehicles and driven to helicopters before being flown out. In the meantime, we had an opportunity to meet Russian cosmonaut Gennadi Padalka who is in line to beat the existing record for cumulative time spent in space during this next flight.

With the crew out of the landing zone, we spent several more hours watching the recovery process for Soyuz. NASA personnel were removing experiment samples. Seat liners were temporarily removed from the capsule and then put back in together with the crew's launch and entry suits. Once everything was okay on the inside, the capsule's hatch was closed again. Backup igniters for the retro rockets at the bottom of the capsule were removed and ignited on the steppes. In the end, the descent capsule was put on one of the Bluebird vehicles, one that was equipped with a crane.

Following the same route that we took to the landing zone, we returned to our hotel in Karaganda stating the evening of September 11, 2013. Just as on the launch tour we had dinner at 01.00 at night. The next day we took a tour of the city and spend time socialising with our guides. After that, we flew back to Moscow and from there back home thus bringing to an end the second of two amazing adventures that together cover both the launch and landing of Soyuz TMA-08M.

We would like to say a particular word of thanks to Andreas Bergweiler of Space Affairs and to our guides Ksenia Nikitonova, Vlad, and Vasili for making it possible for us to go on our two trips in 2013 and making them such beautiful experiences.

Janneke and Ton are like no other space fans!

Returning from Space
Show All Articles