The Flight of Soyuz TMA-08M

The Flight of Soyuz TMA-08M 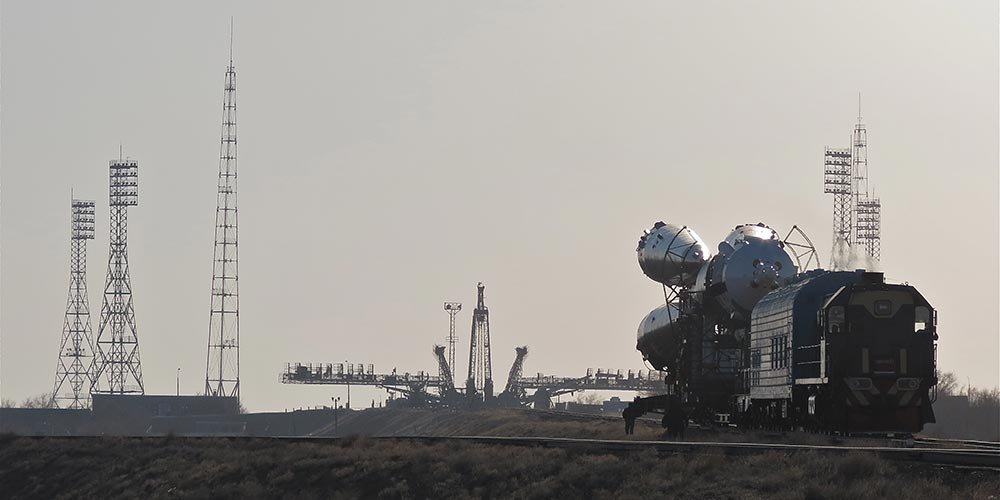 Hey, that man talking to the Russian Orthodox priest that is Mike Fossum and over there, isn’t that Tim Kopra? That is what we thought when looking at the people in the queue in front of us while checking in at Moscow's Vnukovo airport on March 25, 2013. From that moment our adventure to visit the Baikonur Cosmodrome and, in doing so, fulfil a lifelong dream to see a crewed Soyuz launch really began. As we would find out later, this trip would only be the first of two fantastic space adventures we would have that year.

Soyuz TMA-08M on the way to the Gagarinsky launch pad

Our trip to Baikonur had started the day before when we flew to Moscow. Since 2009 we had made several unsuccessful attempts to visit the Cosmodrome. Then, at the end of 2012, we teamed up with Andreas Bergweiler and Space Affairs, and on March 24, 2013, we were finally on our way to Moscow.

Returning to the check-in queue at Vnukovo airport, it turned out we would be flying to Baikonur with a NASA group that, in addition to astronauts Mike Fossum and Tim Kopra, also included astronaut Rick Arnold, the family of NASA astronaut Chris Cassidy who was to fly on Soyuz TMA-08M, as well as NASA spokesman Rob Navias. The Russian Orthodox priest turned out to be Job, the priest from Star City. All of them, but especially Mike Fossum, were very open and friendly. Mike is a great guy. Our adventure could not have started better.

As day turned into evening, our plane started its descent towards Baikonur’s Krainiy airport. Looking out of the aeroplane window, we could see the landscape changing into a brownish, barren desert-like terrain. Moments later, we could make out the first buildings and antennas. At last, we had made it!

When entering Baikonur, one has to sign a paper that one will observe local rules and regulations. The article carries the names of people expected for the launch operations. It is exciting to see your own names between those of, for instance, NASA's associate administrator for human explorations and activities Bill Gerstenmaier and NASA photographer Carla Cioffi. If only for a few days you are part of the space family. The extraordinary becomes everyday work.

Continuing to travel with the NASA group for the rest of our tour, we left our hotel the next morning to go to the Cosmodrome and see the rollout of Soyuz TMA-08M. Leaving our bus close to a railway crossing where Soyuz would pass by, we were met by astronaut Mike Hopkins who was part of the backup crew. The scenery is impressive. All the way around there is this somewhat desolate, brown landscape. To one side of the railroad crossing, one can see assembly buildings, the transporters that were used for the N1 lunar rocket and the Energiya-Buran complex, as well as the Energiya-Buran launch pads. To the other side, the tracks continue to pad number one, Yuri Gagarin’s launch pad or ‘Gagarinskiy start’.

Installation of Soyuz TMA-08M in the launch pad

Then, perhaps still a bit unexpected, the train with Soyuz appeared from between some buildings in the distance, one locomotive at the front and one at the back. Next, Soyuz passed in front of us before making a brief stop to remove the locomotive at the end of the train. Then, with engines first, the rocket started making its way to the railroad crossing where we were standing. Once the train was at the junction, only three meters or so separated us from the rocket. Awesome! After that, it was on to the launchpad to see Soyuz being erected in the same place from where Sputnik and Gagarin took their flights into history.

In the afternoon we had time to walk around the town of Baikonur, see monuments and visit museums. In about three hours one can walk around the whole city which has quite a pleasant atmosphere.

During the day, our lovely tour guide Ksenia Nikitonova had told us we would get a special bonus during the next night: watching a Proton launch! So, at about 22.30 local time, we are back in the bus and again on our way to the Cosmodrome. Apparently, the atmosphere was unique. At almost every crossroads on the Cosmodrome, we could see guards standing next to jeeps blocking the side streets. After an hour's drive, we could see Proton brightly illuminated on its launchpad. A Proton launch is impressive. After ignition, it very quickly accelerates off the pad. At the observation point 2 1/2 km from the launchpad, one is struck by the rocket's roar. You feel the pressure waves on your chest and feel your trousers vibrating. There is no doubt, this thing wants to leave Earth!

In the evening of March 28, final launch preparations for Soyuz started. At about 20.00 we were at the Cosmonaut Hotel to see Pavel Vinogradov, Aleksander Mysurkin, and Chris Cassidy as well as the backup crew leave the hotel and take the bus to the 254 building at the Cosmodrome under the sounds of the song ‘trava y doma’, the grass at home. We then made our way to the Cosmodrome ourselves. Our first stop was at the Baikonur museum where you can see the cottages Yuri Gagarin and Sergey Korolev used and where you can sit on the flight deck of a Buran space shuttle. Our next stop was at the 254 building.

Standing right next to Chris Cassidy's mother who was seeing off her son, we could see the flight crew, now dressed in their Sokol launch and entry suits, walk out of the building and take the bus to the launch pad under the cheers of the onlookers. At 01.00 in the morning we then had dinner (!) and then it was on to the observation point to see three people leave the planet.

The night launch of Soyuz-TMA08M

Soyuz-TMA08M was the first Soyuz to take a short track path to the International Space Station. Having arrived back at the hotel from the launch at about 05.00 in the morning, we were back up at 07.00 to be back at the Cosmonaut Hotel at about 08.00 to see live coverage of the docking of Soyuz with the station.

Chris Cassidy entered the station wearing a fake moustache in honour of the then station commander Chris Hadfield. It was strange to realise that the three-man we had seen walking out of the 254 building just a few hours before when out at the International Space Station and ready to begin their six-month stay.

Watching the docking was the final highlight of our launch tour which in all aspects met and exceeded our best expectations.

However, it was not to be our last space adventure in 2013.

Janneke & Ton were close to despair as they made their request.
For several years they tried to go to Baikonur, but they were always unlucky and lost a lot of money and patience, until they met Space Affairs.