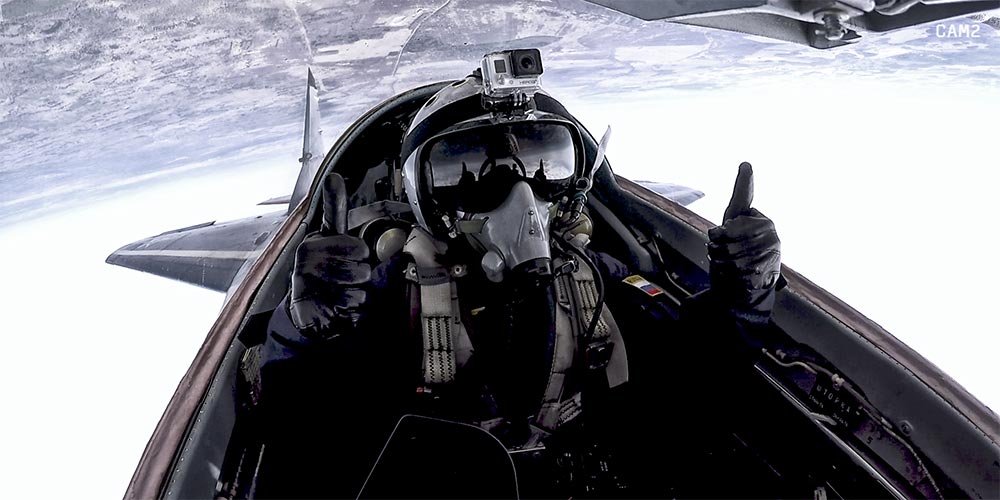 And then the day had arrived the Big Day. Wasn’t able to sleep many hours during the night, but got up and felt refreshed with adrenaline pumping. A small breakfast was eaten (not worth overeating in case of air-sickness) and then it was time to meet up with my guide and interpreter Irina in the hotel lobby at 8am and transfer to Sokol Airbase. It was easy finding Irina in the hotel lobby (since she held a sign with a MiG-29) and she projected a calm, warm and professional impression. With very well English and a short presentation of herself, we joined Sergei, the driver, who began driving us to the airbase. The almost 30-minute transfer felt yet like an eternity before arriving at the actual base. Along the way, Irina described what was going to happen during the day and how things work. To even be able to set your foot on the airbase requires a minimum of 2 months of paperwork and application needs to be done in time.

Sokol – Nizhny Novgorod construction plant – was built in 1932 and is today one of the leading plants within the industry in Russia. From the get-go, aeroplanes has been mass-produced here, and over 40000 planes have since left the plant. But it was not until 1949 that the collaboration with Sokol and Mikoyan and Gurevich took place and the very first MiG-15 started to mass-produced and exported. Continued cooperation led to the jet aircraft MiG-17 before the first supersonic – MiG-21 – was produced which opened up a new path for fighter jets worldwide. While manufacturing the MiG-25 Sokol Airbase underwent a technical revolution and quickly became one of the highest tech manufacturers within the industry.

MiG-29, also known as the Russian Beauty, is one of the Russian Air Force’s most prominent fighter jet classified as a 4th generation combat aircraft. It was during the early 1980ies that MiG-29 was designed as a powerful and impressive fighter jet with superior qualities of hunting and attacks with missiles. MiG-29 is one of the most known and advanced combat aircraft in the world, and its feminine shape has made it liked by not only men but also women. MiG-29, also called Fulcrum, are manufactured in many models and flies in over 25 countries where it often serves as a light front-line fighter within the countries Air Forces.

Ground check of the MIG-29 with test pilot Andrew Pechenkin

We were met by representatives at the gate at the airbase. Level of security was high and multiple security checks of cars, passengers and passports were made at different check-points before we even had arrived at the control building where medical check-up, change of clothes and briefing with the pilot would take place. Before I also got out of the car the photographer and video maker had started their work; to document everything for me. Then I was received by personnel that had arranged and would make sure I had the experience of my life and the medical doctor that checked my blood pressure and pulse, and perhaps the most important of all – meeting the pilot. To honour the day Andrew Pechenkin had been appointed as my pilot, one of three test pilots at Sokol Airbase specially approved to fly civilians in MiG-29 UB. You do put your life in the pilots’ hand every time you fly commercially, but it gets a little more personal and up-close when you get to shake hands and talk to the pilot himself performing all aerobatics. Andrew gave a calm and stable impression, and it felt right straight away.

After a short briefing of different aerobatics, I got to tell what I wanted to do during the flight. “I want to try as much as possible” was my response. I mean, if you have paid the money - why not? ;) Then came the first surprise of the day. Andrew handed over the blue flight dress I would be wearing during the flight but also as a gift for my birthday, which I could take with me back home. And this was only the first out of many birthday gifts given to me during the day. Soon after that, it was time to change into more appropriate clothes. Fireproof underwear and the anti-G-Force suit looking more like a body corset with tubes in it. Not only was it tight fitted, but it was also laced up tight on both arms and legs and torso for best fit and function. When the anti-G-Force suit was tight enough, I jumped into the blue flight dress. Then it was boots on and time for transfer to the apron where the MiG was.

Together with the photographer, video maker, Irina, Andrew and some more people, we drove out onto the apron where the MiG-plane was waiting. On sight, Andrew performed a visual inspection of the aircraft to check up fundamental things like the aircraft not leaning (due to low pressure or inflated tires), the bolts are in locked position, air inlet, turbofan engines, landing gears, and wings and so on are okay. After that, it was time to climb up the ladder and be seated in the cockpit. A serviceman followed me up the ladder and helped buckle me up with all belts and buckles for the parachute, ejection seat and oxygen. The instrument panel in the back seat, where I was seated, was equipped with meters for most things; speed, altitude, G-Force, gyroscope, oxygen etc. Andrew climbed up the ladder and explained most of the meters, how to use the communication button to communicate with him during the actual flight and which buttons not to touch. And most important of all; the handle of the ejection seat... only in case of.

Put the helmet on, and after the anti-G-Force suit had been connected and oxygen mask switched on, I gave thumbs up and waited for Andrew to be seated in the pilot seat in front. The sound of the two RD-33 turbofan engines firing up sounded sweet to my ears and Andrew started the system check of things like stabilisers, rudders and the wings flaps and slats. For the second pilot (me) there is tandem configuration with like control stick and pedals (just as the first pilot has) since The MiG-29UB is a two-seated combat trainer to prepare and train MiG-29 fighter pilots. After the canopy was lowered down and in the locked position, Andrew taxed out to the runway for takeoff. When in place and cleared for takeoff by the control tower, you could just ride along ;) Here is a small excerpt from the section "Aerobatics with the MIG-29", which we performed when we came back from high altitude, Andrew performed 3-minute maneuvers over the tarmac, and you can't describe such a thing with words!

When the plane landed on the track again after all aerobatics (different rolls, loops, inverse flights and hammer among other things) I didn’t feel all that great, but it wasn’t until the very end of the trip that I thought my brain lost orientation and of course, vertigo came instantly. But I got out of the plane on my own and became very happy when Andrew announced I just had experienced 7.0 G-Forces. Like, little me?

When back in the control building it felt good to lie down for a while and just let the brain unwind and realise I was back on mother Earth again. The whole experience ended with a finishing ceremony with receiving a diploma and greetings from the pilot and the team behind the entire experience. Since it was my birthday, I also received a huge bouquet of roses and received congratulations and even more gifts. But it didn’t end there, no, no.
Once back in my hotel room, the general manager at the hotel had sent up a bottle of wine and a fruit basket to my office along with a letter. This day is by far the best experience and birthday in my whole life and to subsequently see all photos and videos from this day makes me re-live the flight all over again.

It’s difficult to understand how many people who actually are involved in an experience like this. Of course, the pilot himself has a crucial role, but there are so many other people that you never get to see, who are very important; firefighters, ground people, technical personnel and people working with security, radio communication in the control tower is just a few. Without them, this would never have been possible.

And many who are asking me about the price for this experience has been chocked over the cost. But what do they expect the amount to be to refuel a machine like that? It is not free. Though the MiG-29 is designed for unique manoeuvrability and high speed and especially superior in short range combat, but it still was necessarily to refuel over 3000 litres of jet fuel just for my flight.

Angelica contacted us nine months before her flight, and a few weeks later she was no longer sure whether she wanted to go to Russia because of the political situation.
We talked to her about it and after she thought about it differently, she set off on the adventure of her life, exactly on her birthday!